Prague: the capital of the Czech Republic, and a city that can only be described as something straight out of a fairy tale.

We arrived at around 6pm, after leaving Berlin on an international train.

We lucked out with our very own carriage, complete with our own climate control. Other than the food cart, and the guard who came to check passports at the border (although he only checked mine), we were completely uninterrupted. All that was left to do was to relax and enjoy the view for the next four hours.

Once there, it didn’t take us long to navigate the cobbled streets (not ideal when wheeling a suitcase), and gothic architecture, and find our way to our accommodation; Hostel Ananas. This was very conveniently located, however that was about all it had going for it. The room consisted of just two sets of bunk beds, and nothing else. And if it didn’t sound enough like a prison, the window also had bars on. But, we needed a cheap place to sleep, and it certainly ticked both of those boxes. We didn’t plan to spend much time there anyway: Prague was calling out to us to explore.

After czeching in, we headed straight out for dinner. We dived straight into the culture, opting for a traditional Czech meal, in a restaurant that had medieval décor. Unfortunately it also had another trait reminiscent of medieval times: indoor smoking. This has yet to be ruled out under Czech law, and so my lungs had a sudden and unwanted throwback to coping with second hand smoke in the restaurants of my childhood. Despite this, the restaurant was great, and the Goulash was delicious. Definitely try some if you’re in Prague.

After dinner, we headed to a bar popular with the locals, and did some beer tasting (only right considering we were in the country with the highest beer consumption per capita in the world). Five of the local beers were bought to us in a test tube rack, including regular beer, blueberry, and banana flavours. I always knew blueberry would be my favourite, and I wasn’t wrong. For a girl that doesn’t particularly like beer, I seemed to find myself drinking it a lot on this trip so far.

Upon arrival back to the room, which we shared with two lovely Korean girls, who cutely corresponded with us via Google Translate, we took a detour to the hostel’s common room, and played cards (we became professional card players on this trip). By the time we decided it was bedtime, it was quite late, and we knew our roommates were bound to be asleep (bed time at a hostel is always awkward, whether you are the ‘asleep’ party, or the one coming in trying not to wake anyone up).

As we got closer to the room, we started to hear a strange noise. The closer we got, the louder it got. As we stood outside the door about to go in, it dawned on us that what sounded like a farmyard was in fact coming from inside the room. We opened the door and we looked at each other. Neither of us could contain our laughter, and we swiftly reversed back into the corridor, where we stood laughing for about two minutes. I was looking forward to getting three peaceful nights sleep in this room.

The next day, I finally got to see Prague in daylight. And it was beautiful. The main square was so charming, with the famous Astronomical Clock at the centre of it. The clock face is beautiful to look at- czech it out on the hour for a cute show as it chimes. 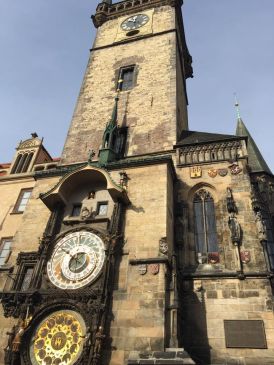 From the square, we walked to the River Vitava, where we caught a boat tour. I have come to realise that I bloody love a boat, and so I very much enjoyed this.

The tour took us under Charles Bridge, one of the most famous landmarks in Prague. Walk across it to see the infamous statues that line the sides, and enjoy some great street performances, but also walk across a parallel one to see it in all it’s glory.

Next, we wondered around the city, this time on the other side of the city from the old town and tourist hub. On our way back, we stumbled across the John Lennon Wall. It has been there since 1988, when young Czech’s would graffiti it, even when the authorities painted over it time and time again. Today is representative of love and peace. We were greeted by a guy and his very best effort at a John Lennon tribute. It was entertaining, but probably not for the reasons he had hoped.

On the second night, we were feeling daring, and decided to join in the hostel bar crawl- albeit just for one or two of the bars and then head home. That is however, not what happened (of course).

Rendezvousing in the hostel lobby with our fellow party people, we got talking to a Dutch girl, who was backpacking around Europe on her own. She seemed lovely, and we spent our time in Bar Number One together. Also found in Bar Number One were free shots. This is when lovely Dutch girl went a bit AWOL (very brave considering she was completely on her own and anything could happen to her), and we made some new German pals instead (getting fined on the Metro in Berlin made for a great icebreaker). These German boys were lovely, and as we moved onto the next bar, and vowed we would go home after that one, they convinced us to stay out with them.

I wish I could tell you what the name of the big multi-story superclub was that we went to, but I had no idea at the time and still don’t now. We were being led in a group, and didn’t even know where we were either: this bode well for two girls, trying to get back to the hostel, in a foreign country, in the early hours of the morning didn’t it.

But in the mean time, we had a great time in the club, which was not at all clouded by stress that drunk people in close proximity were smoking on the dancefloor, and may or may not set something on fire. The music was classic Euro-Pop, just what I was hoping for, and I loved every second.

Miraculously, we made it back.

An absolute must-do is a visit to Prague Castle, which we did the next day. We chose to walk up, which was a fantastic idea until we reached the outskirts of the Castle District. It became almost a ninety-degree angle. It was SO STEEP (and we were SO HUNGOVER). But once we reached the top, it became clear it was definitely worth it. At the Castle walls you are treated to an absolutely stunning panorama over the rooftops of the whole city. 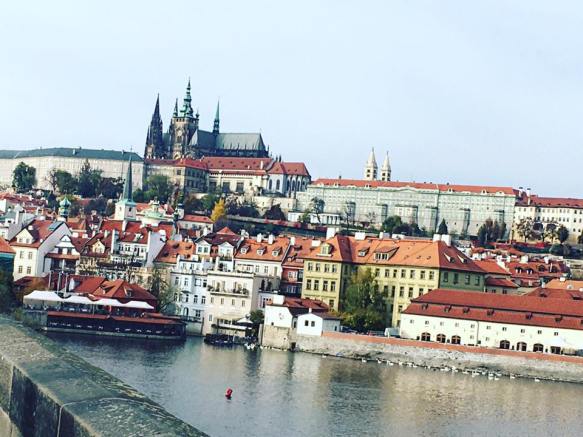 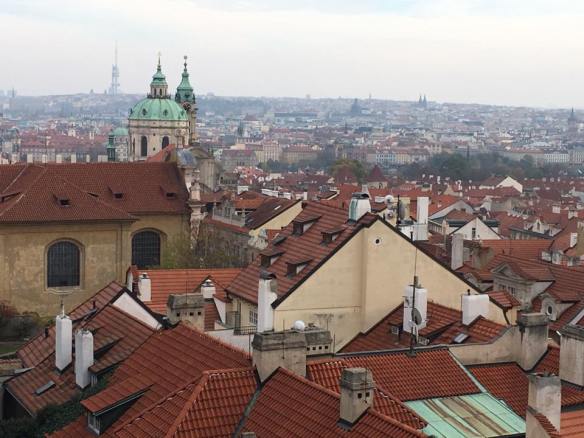 Because the city is quite small (you can quite literally see the whole thing from this viewpoint), I would say three days is the perfect amount of time to spend here, as you may quickly start running out of things to do.

Perfect then, that on our third night, after some people watching in the main square, under a blanket with a glass of wine, we headed off to catch an overnight coach to Poland.