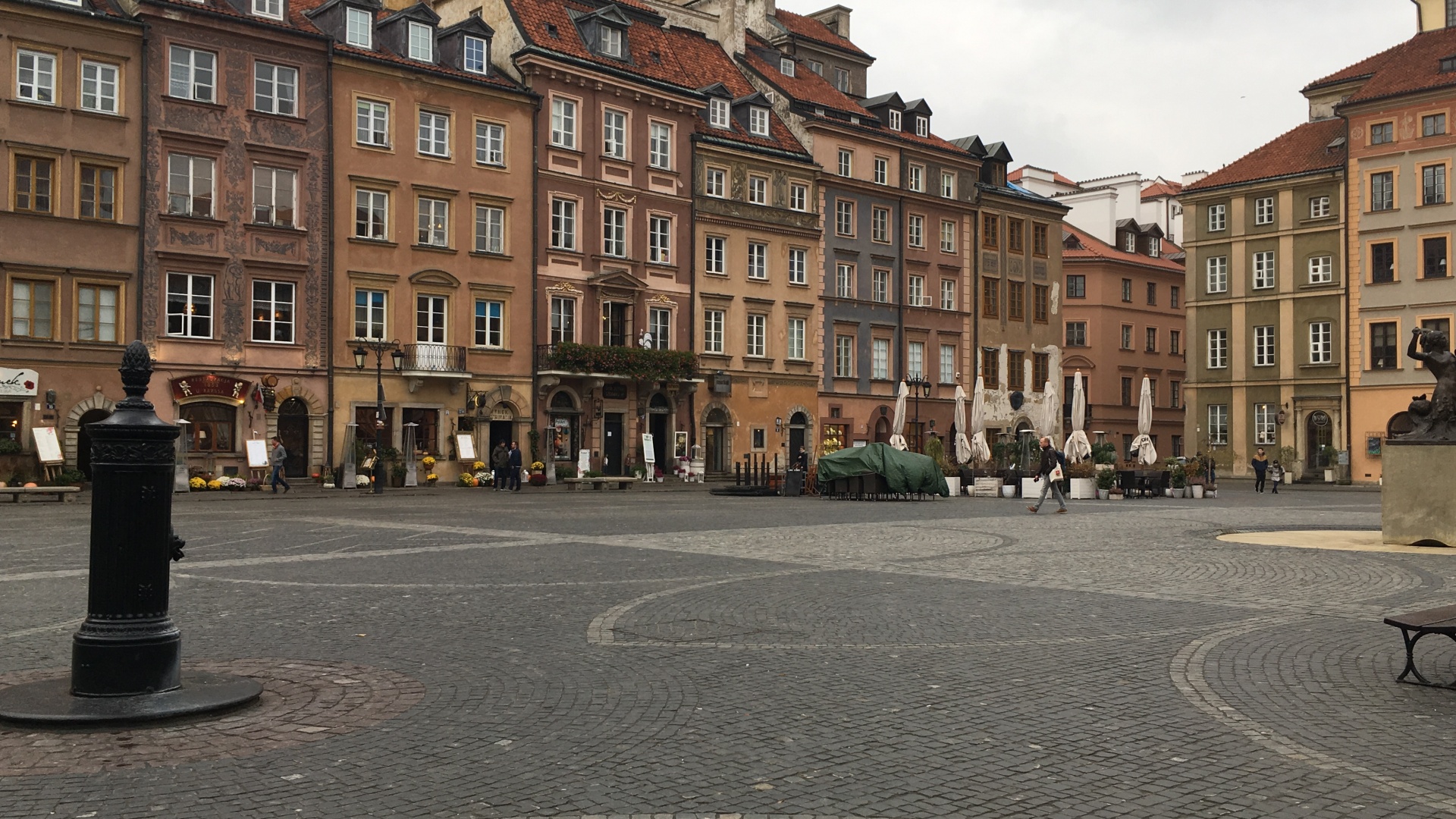 Jenny and I arrived in Warsaw rather unceremoniously. It was at around 7am, after a 9-hour journey on an overnight coach.

As someone who used to find it hard to sleep on public transport, the thought of an overnight coach was really daunting. Would I get any sleep? Or what if I slept but missed my stop? Or someone stole my bag whilst I was asleep? But actually, it was a great experience! Once we were on, it was warm, safe, and with our blow up neck pillows, we were cosy and chilled.

Upon arrival we were literally chucked out in the bus station, (which was fairly in the middle of nowhere), on about 4 hours of broken sleep and in last night’s makeup. Luckily there was a bathroom, and we, along with the rest of the coach, decided it was the perfect place to brush our teeth and freshen up.

Once we felt suitable (enough) for public viewing, we headed to the nearby metro stop, to try and figure out how to get further into civilisation.

Luckily for our sleep deprived brains, the metro in Warsaw is very easy to use; there are only two lines, M1 and M2, with only one crossover stop between them, so you can’t really go wrong.

We saw there was a stop for ‘Centrum’ and decided that would be the place to head. It helped that we were at Mlociny, the first stop on the M1 line, and as far north as we could be: so there was only one direction we could possibly head in.

We arrived at Centrum, and treated ourselves to a McDonalds for our hard work. And so began my ‘thing’ of getting a McDonalds in every place I visit.

Once finished, we put our suitcases in a locker at the Central Station, and went in search of the sightseeing bus: the perfect way to see a place you don’t have too much time in.

By the bus stop, and straight out the front of the station, is the Palace of Science and Culture: one of Warsaw’s main sights. It is the tallest building in Poland, and home to the cultural hub of Warsaw; featuring theatres, sports clubs and scientific institutions among other things. It was also the first of many sights we saw that day.

From here, we hopped on the bus to the Old Town, learning lots of facts, and getting a real feel for the city along the way. When we got off the bus at the Old Town, we were prepared for a bit of a chill, because it was cold in Prague. But it was FREEZING in Warsaw.

Nevertheless, we enjoyed a walk around the area, taking in every inch of its cuteness. We saw Palace Square, Castle Square, and the Mermaid Statue, until it got way too bitter outside, and we were forced to dive into Costa to warm up.

After what seemed like a never-ending wait, we caught the bus back to the centre, and prepared to brave the cold again. There was still a bit of time before we had to be at the hostel, so we headed to the Photo Museum (Fotoplastikon Warszawski). It was a collection of photographs of Warsaw, and people just living daily life in the city, from historical periods. This is definitely worth a visit, if like me, you are interested in how people used to live, and what places used to be like. It’s particularly eerie to think that these people were just having a casual picture taken, and never expected to be living on in a museum. The photos are 3D, so its almost like the people are alive. Once we were finished here, we collected our suitcases and made our way to the hostel.

We were booked to stay at the Chillout Hostel, which was centrally located, an easy 15-minute walk from the central station, and the mall and transport links that are nearby.

When we arrived at the hostel, I got very good vibes: it was open and clean and friendly- and oh my god there was a proper bathroom with a walk in shower, and a whole room to leave your clothes and get changed in- a luxury we hadn’t seen in over a week!

We had two (very long) showers, and went back to chill in the room that we had to ourselves. But that was about to change, and we were certainly in for a treat.

Although pretty sure we had selected a female only dorm, a male, about our age, was shown in by the reception staff. First impressions weren’t great; he had to be shown about three times how to get into the room (you touched the fob on the handle and then typed in the simple code), and he still didn’t understand (perhaps this is why he never left the room). The staff were getting visibly annoyed with him, but he soon stopped being their problem, and became ours.

Once the door was shut, and the same air was left to circulate the room, it became clear the door wasn’t his only issue: he also had some serious BO. Perhaps he should try out one of the luxurious showers down the hallway?

At first we tried to be the mature adults that we are and rise above it, but it got so bad that we couldn’t physically breathe, and he was somehow able to make us look like the weirdo’s.

This is because it was about -3 degrees outside, there was snow on the ground, and it was dark. But I needed any excuse to get that window open and fill up the room with fresh air, quickly. So I found myself dramatically exclaiming

‘Oh wow, it’s hot in here! Does anyone mind if I open the window?!’ (It was not hot in here at all). I felt so guilty and awkward, and knew I only had about 30 seconds of fresh air before he started getting suspicious.

‘JENNY COME AND LOOK AT THE VIEW!’. There was no view. It was pitch black. We looked like idiots. We prolonged our window session with random and vague comments about ‘the view’, such as ‘ooh look at that over there’, but eventually we had to shut the window, and hoped the fresh air lasted. Spoiler: it did not.

The guy seemed completely oblivious however, and spent the whole time watching something on his phone. He only looked up to ask what our evening plans were. This filled us both with dread- we thought he was going to ask to come to dinner with us, and how could we say no? Thankfully, he didn’t, and we headed out into the crisp night, wearing about five layers each.

The place we selected for dinner was again, a traditional place. It was very popular and we had to wait for a table, but it was SO worth it.

When we finally got home, after battling snow, the boy was still awake. This was a common theme it would turn out, as he was also still up, staring creepily, at about 5am when we were rudely awakened by our alarms. Usually, I’d hate to wake up at that time, but on this occasion I was more than happy for the excuse to escape the BO ridden vacuum. Plus, we were off to Krakow.

We headed to Krakow with the sole intention of going to Auschwitz. But, we were knackered by the time we got there that actually our 24 hours in the city turned into a little rest and recuperation.

We were staying in an Air B’n’b, and it was fantastic to have our own space for a while. As soon as we got there, we headed out for lunch. We found, again, a traditional café, and enjoyed what was to be the first of many soups in a bowl made of bread. It quickly became my new favourite concept.

After we had eaten this, and tried a selection of local cheeses (also delicious), we walked around the Main Square, and checked out the indoor market. They were beginning to set up the Christmas market, so it was a shame we didn’t get a chance to see that too!

We then left the old town walls, and walked to a supermarket, aiming to get ingredients to cook dinner later that evening. We purchased the essentials: pasta, and a bottle of wine, and headed back to the Air B’n’b, where we ended up staying all evening.

We had a great night taking in the culture in a different way than originally planned- drinking wine and watching Polish TV. We particularly enjoyed the music videos we saw, and had a laugh translating the songs- some lyrics turned out to be rather questionable! Then, it was time for bed before a morning coach ride back to Warsaw.

You know they say people never forget where they were when they heard John Lennon had been shot? I think the same applies for when you found out Trump had been elected President. We woke up to the news the next day. Neither of us could believe it and spent pretty much the whole 4-hour coach journey back to Warsaw in silence and in shock, reading tweets and news articles about it.

That was until we stopped in the city in between Krakow and Warsaw: when we were bought back to reality.

The driver had left the doors open and unattended whilst he went round to the luggage storage, leaving just enough time for two lurking men to get on. It quickly became obvious that they were not meant to be there; not least because of the stench of alcohol coming from them. Of course they decided the ideal seats were the ones across the aisle from us, and of course they also proceeded to try and talk to us. For a while we got away with ignoring them as we could pass for not understanding what they were saying: but then they broke into broken English. At this point it became clear that we were deliberately ignoring them and they didn’t like this. I could sense them getting annoyed and so I turned around and said hi. They continued trying to talk to us for a few minutes, and then somehow miraculously got up to leave. The tension visibly left mine and Jenny’s bodies, but we shouldn’t have got our hopes up too soon, the worst was yet to come. One of the guys was trying to get the other under control, and told him he should say sorry for harassing us. This he did, and then he took my hand AND KISSED IT. I can still feel where that sloppy mouth landed on my hand to this day- I used antibacterial hand-gel straight away, but no amount of washing could make me feel clean.

Back in Warsaw, we enjoyed another afternoon of sightseeing, including seeing the Museum of Chopin, and learning about the Warsaw Uprising, and dinner at a highly-recommendable restaurant called Sphinx, before we got a taxi to the bus station for another overnight coach: this time to Vilnius, Lithuania.