When we stepped out of the bus in Vilnius, it was about 6am; snowing; and we hadn’t a clue where we were. After having a bite to eat in the bus station café, it was a more reasonable hour, and there were a few more people about.

Unfortunately, as it turned out this didn’t really matter. No one was willing to help us with what bus we needed, or the best way to get to our apartment. We went to the ‘help’ desk, only to be told we needed to go to a different desk. So we went all the way to the other side of the building, only to be told we needed a second different desk. And when we got there? We had to go back to the original desk apparently.

About half an hour, and no help later, we finally decided we would be just as helpful if we directed ourselves. And even when we got to the bus stop, people there wouldn’t tell us which bus we needed. I was starting to get a really bad feeling about this place, and we were stuck here for three days.

Somehow we made it to our Air B’n’B. This was actually a lovely little room, with a very comfy bed, fantastic bathroom, and very effective black out blind.

Once we ventured back out, it had stopped snowing, and I saw Vilnius in a new light. It was actually really pretty. Not far from our apartment was the Museum of Illusions. We had seen it advertised outside as we walked past it, and decided on our way back from our wander to head in. This was a great way to spend a few hours, and we had so much fun! A lady that worked there guided us round the illusions, explaining what each of them was supposed to do, and performing the most important job of all: paparazzi. Here are just a few of the shots we ended up with! 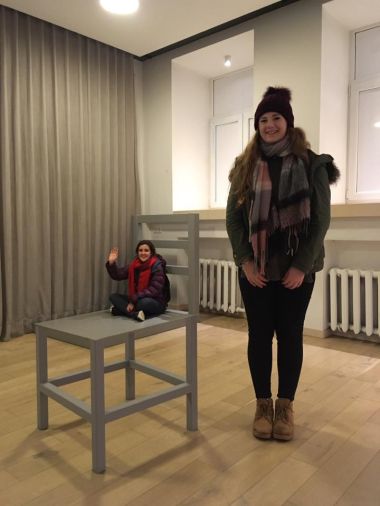 That evening, we went back to the safety of the room, and played cards. It was here we discovered what is now my all time favourite card game (and the game I have inflicted upon everyone else that dares pick up a pack of cards around me- sorry).

Then, we went to bed, and woke up much later than planned- I told you the blackout blinds were good.

On day two, we had a wander around looking for brunch, and found a gorgeous little bakery called Pinavija (that we ended up frequenting). It was so cute and picturesque, how could we resist! It offered soup and other sensible food- but we were there for the pastries. No other pastry will ever compare to the blueberry filled one from this café.

From here, we hopped on the sightseeing bus, which took us on a loop around the river, and up the main streets. We took in the Church of St Peter and St Paul, Vilnius Cathedral, and Gediminas’ Tower. They are all very grand, beautiful buildings. We didn’t do this, but if you climb to the top of Gediminas’ Tower there are breathtaking views over the city!

Up one of these streets that we were driven down was the Cat Café (Kačių kavinė). We ventured here on day three. I know they are everywhere now, but at the time this was a novel idea. And it was so cool. We sipped hot chocolates whilst the cats roamed and played around us. They were very well cared for, and we were only allowed to pet them if we wore the latex gloves provided- which obviously we opted to do.

Next, we visited the National Museum of Lithuania. This told us the story of the country’s history, and gave us an appreciation for why some of the people were so cold and unhelpful- they had been through a lot in their lifetime. This museum gives you the chance to become very empathetic with them- through photographs, videos, and access to the real life prison rooms that people in exile inhabited. This was a very humbling, shocking, and all round emotional place to visit, but I would definitely give it a go if you are in the area- after taking in all the hard truths, I came out with a whole new perspective on the city.

The next day, after a final trip to our favourite bakery, the time had come to leave the capital of Lithuania, and actually despite concerns upon arrival, we hadn’t had a bad time. Yet.

This is destination number five of six on our trip, and so at this point we definitely have this travelling malarkey down. So, we head to the bus station where we got abandoned on our first day. We’re a bit early so treat ourselves to a McDonalds whilst we wait, congratulating ourselves for being fantastic, organised travellers.

Something told me though, to check the bus ticket again. I don’t know what or why, but I am so thankful I did, or we might still be in Lithuania as we speak. Surely an international departure would leave from the main bus station, right?

WRONG. Very wrong. And we only had about half an hour to correct this momentous mistake or have it ruin our plans completely.

We realised booking an Uber was our quickest way to the correct bus stop.

It was unfortunate then, that the driver didn’t know where the destination was. We had a street address (Ukmerges g.), a stop name (Seskines poliklinika), and a map on the ticket showing where the stop should be. But he didn’t seem to be able to take us there, opting instead to drop us off somewhere vaguely nearby.

At this point, we were even more lost than before, and to be honest may have been better off staying at the other bus stop for all the good it was doing being there.

I searched on Google Maps, and it said it was a ten-minute walk or so to the bus stop. We didn’t really have that long. We literally marched down the road, and when we got to where the stop was supposedly meant to be, we were very underwhelmed. All that was there were a supermarket, a car garage, and a regular bus stop like you would find on a normal street. Why would an international bus stop there? Despite this, we hung around for a minute or two, in case it turned up. It didn’t, and now we only had a few minutes until it would be turning up at the correct stop, and we wouldn’t be there.

At this point, we were panicking. Hard. We decided to go to the supermarket and ask someone for directions, even though we were convinced we had already missed the bus.

Unfortunately, the staff had very little to no grasp of English. And we had no to very no grasp of Lithuanian.

We stood there politely pretending to understand, when the saving moment occurred. A new member of staff was beckoned over (who we may literally owe our lives too), and I saw understanding wash over her face. In between stuff we did not understand, the place name ‘poliklinika’ is mentioned. And there is lots of direction pointing. We got through to someone. YES. We thanked her and ran on our way. I checked my phone and I had two missed calls from a Lithuanian number-it must be the coach. I prayed they were just checking we were coming and not ringing to say they have left without us. We ran down the road, with little to no hope left.

BUT THEN. We come across this big leisure park style place, with restaurants and a cinema. A street sign said Poliklinika. Were we there? Did it matter anyway; surely had the coach already left? We had basically given up, as there was no coach in sight, and again, only two regular bus stops.

But something told me we had to cross the road. We did, and as we arrived at the bus stop, (and thought we had no chance, but that we would stand there for a bit and at least look at alternative routes out of this hell), a miracle occurred. Over the horizon, like something out of a dream, a bus appeared. Not daring to get too excited, we held our breath, and as it came closer, we were able to read it.

As it turned out, they were calling me to say they would be late. We were saved (although until we got to Riga we couldn’t believe it). Someone was watching over us that day, as it was against all the odds that we made that bus. But we were on our way to the final stop on our journey.

2 Replies to “Lost In Lithuania”