Sweden: lovely people, makers of fantastic furniture, and (arguably most importantly) incredible Eurovision songs. I’d always thought I would love the country, so I was very excited to finally go and experience it for myself.

Jenny and I (yes, she was willing to go away with me again even after we were almost Lost In Lithuania) had 72 hours to explore our destination of choice: Stockholm.

After what was the scariest flight I’ve ever taken, (the turbulence as we started our descent over Sweden was like nothing I’ve ever experienced before; the plane seemed out of control, and quite a few people were screaming and panicking as we were getting thrown around.), we landed on the Friday morning, and the countdown began.

I was even more excited than before to be there, and have never felt happier to be somewhere in my life (even if I did feel sick from being thrown around).

From the airport, we took the Arlanda Express, a twenty minute fast train directly into the city centre. It’s by far the easiest way to get in to the city, and the seats are spacious and comfy. However, for adults it is an abrupt awakening to the priciness of the city, with a one way ticket priced at 295 SEK (roughly £25). Under 25’s get to pay significantly less however, at 165 SEK (roughy £14). Welcome to Stockholm.

From the station in the city centre we (got a bit lost before we) found our hostel.

The hostel we were staying in the Generator Hostel, a modern and vibrant place, perfectly located in the Norrmalm area of the city, just a short walk from the city centre, and a lot of the tourist attractions. The rooms were a good size, but the bathroom was tiny, and the shower felt like we were camping. I was very impressed however, with the USB sockets by each bed: a very handy addition if you happen to forget a plug adapter! But the bar was the real star of the show. It was amazing. There were even swings in it!

But we didn’t spend long in the hostel before we headed out to start exploring. We strolled down to Gamla Stan (the old town), which is compact with cute cobbled streets and little alleyways connecting the narrow streets together.

The first thing that struck me about this city is that it super clean and just feels completely fresh.

It complements the friendly nature of the place that I had envisaged. I still think it is the cleanest place I’ve visited; I don’t remember seeing a single piece of litter.

On the Saturday, our only full day, we started off with a boat tour. Stockholm is a city split over a lot of bodies of water, and so this is the perfect way to take it in. I love a boat tour, so it takes a lot for me to not enjoy it, however this one seemed to discover what that was.

The set up was fairly boring, and if it wasn’t for them encouraging us to join in the Swedish tradition of Fika (basically a good excuse to have coffee and cake, namely a cinnamon bun, with the purpose of making time to spend with friends and family), I would have actually fallen asleep. It wasn’t that there wasn’t stuff to look at, because the views themselves were stunning, but they could definitely have livened up the whole tour just a little bit, starting with a recorded man reading the information that didn’t have a monotonous voice that made you want to die. Considering the tour was two hours long, this tiny adjustment would have been ideal.

Once we got off the boat, we needed waking up, and so we took a walk to our next destination: the Skansen Outdoor Museum in the Djurgården area. This is quite a walk from the city centre and so it is definitely a good idea to break the journey up a little like we did.

It was fantastic. It is a showcase of traditional Swedish life, and you could spend hours wondering around and looking at everything. The best part was the animals though. We made a beeline straight towards these, and had a fantastic time watching moose, bears and seals just going about their lives. This is outdoors, but if the weather is on your side then this is highly recommended.

And, once you’re done in the museum, it’s only a short walk up the road to Sweden’s number one tourist attraction* the ABBA Museum. (*not a fact).

This was how we elected to spend the rest of our afternoon, and it was everything I wanted and more. There were the real life costumes and other historical ABBA things, but most importantly, there is the chance for karaoke and to star in your own music video! A great afternoon full of laughs. It’s a little pricey but as a big draw and a must do they can get away with it. A fantastic way to spend an hour or two. 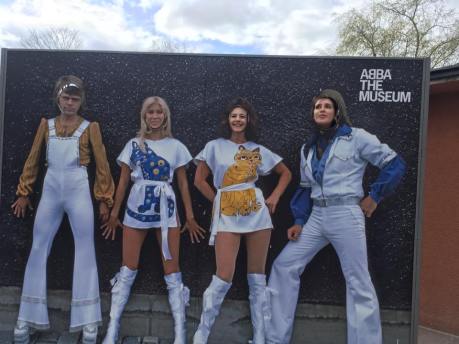 For dinner that evening we went full Swede. It’s always a good idea to try some of the local cuisine whilst you are away, and so we headed to a traditional restaurant, where we were seated right next to the chef as he was cooking up our meatballs in the open kitchen. He was very friendly and we got talking to him. As soon as he found out we were from England he told us a story about the one time he had been to visit. He was on a school exchange, however the school had forgotten him and left him with his exchange family (we never really got to the bottom of it). It’s a very good thing that he made it back to Sweden however because the meatballs he served us were delicious.

As we enjoyed them, a live band started to play, which we listened to for a while, before naturally deciding we would prefer to spend the rest of the evening on a swing in the hostel bar.

This city is very walkable, even if it can take a while to get to some farther away places. So on our final day we took a walk to a new part of the city: Södermalm. This part was past the old town, and off the beaten tourist track. It very obviously less touristy, so it was great to get a feel for real local life.

On the way there, we did some shopping. We ventured into the Swedish answer to John Lewis, Åhléns. One week before we visited, the city had been rocked by a terrorist attack outside this department store. It was so raw and haunting, with fresh flowers and teddy’s being laid, and people paying their respects. It was horrible, and impossible, to imagine what the people must have felt like, standing exactly where we were just a week before.

Wondering back through the old town, at the end of the day, we had one last meal in an Italian restaurant, whilst reminiscing and taking stock(holm) of the weekend, before heading back to the airport.

Stockholm was everything I thought it would be and more. I was right about the people being absolutely lovely, (and obviously the furniture and Eurovision too), and fell completely in love with Scandinavia.

I only had two reservations about the city. The first is weather related: it was very unpredictable, although this is probably due to the fact we went in April. One day there was a real chill in the air, and the next and we got very lucky, and I was only wearing a tshirt. The second is more of a concern; the priciness. It can be done on a budget but to get the full experience it is worth spending a bit of money.

I absolutely fell in love with Sweden and wouldn’t hesitate to return. As ABBA themselves almost said, Take A Chance On Swe(den)!