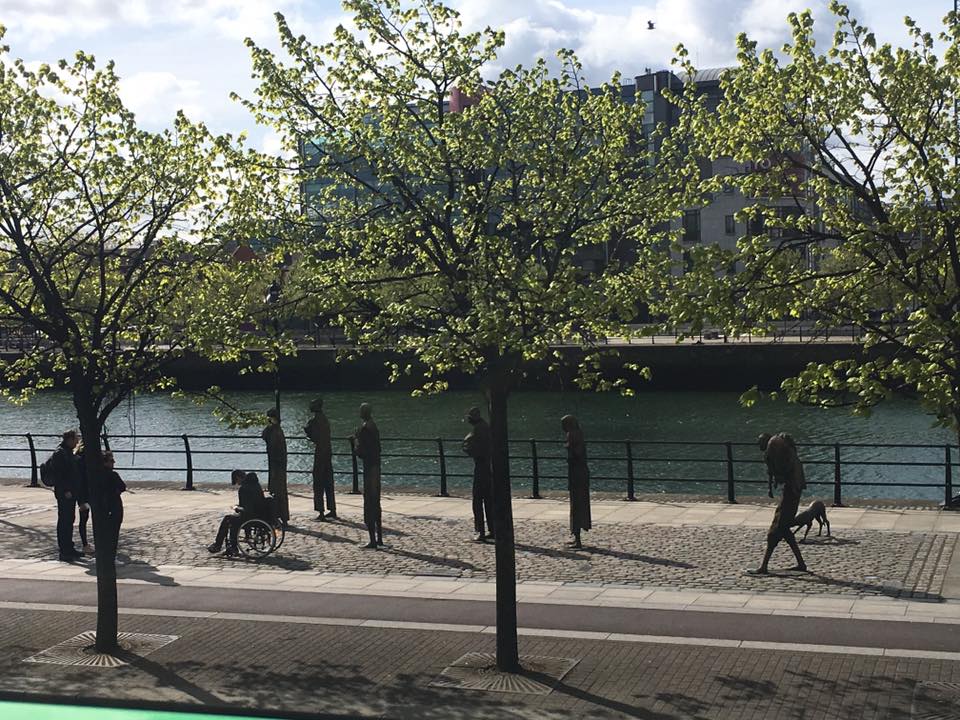 April 14th 2017 was Good Friday. And it was a good Friday indeed as myself and my friend Grace were jetting off to Dublin. I had wanted to experience the charm of the Irish capital for a long time, and I was very excited about finally doing so.

We were flying RyanAir, and although they did the job, it certainly wasn’t the comfiest of flights- there wasn’t even a seat pocket in the plane, and the safety card was printed on the back of the tray table instead!

After a delayed start – thank you to the man that refused to end his phone call, despite being asked multiple times, and not being deterred by the death stares from all around him, and despite knowing that the reason the plane couldn’t take off was solely down to him; we landed about 6pm.

Along with the rest of the plane, we had the intention of going for a drink or two. But unfortunately the cabin crew to dashed all our hopes and dreams with one single announcement…

‘Ladies and gentlemen, on Good Friday in Ireland no alcohol can be purchased or consumed in public places’.

This is due to the country being heavily catholic.

I’m surprised the plane didn’t go down with the amount of deflation on board.

(The man that delayed us fell completely flat on the ground in the aisle when trying to get his bag out of the overhead though. I think he had known this little bit of info and stocked up beforehand).

Instead, when we arrived at our Travelodge in Rathmines, (which is called the city centre Travelodge but is still a fifteen minute bus ride out), we ventured out to the local supermarket and stocked up on snacks. True to the plane rumours, the alcohol section was blocked off and even guarded so that no one could dare buy any. But we were content with our soft drinks, enjoying a chilled night in before some serious tourist-ing.

We opted for a sightseeing bus the next day, which is the ideal way to get a feel for a city, and some basic navigation around it. Along the route, we took in all the sights Dublin has to offer, including Trinity College, Ha’penny Bridge, and the Famine Memorial. Although this looks pretty against the blue sky and the blossoming trees, it obviously has a very sad but important meaning. It commemorates the event that has had the worst ever affect on Ireland: the Great Irish Famine (1845-49). 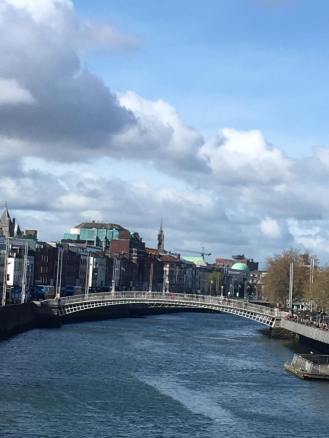 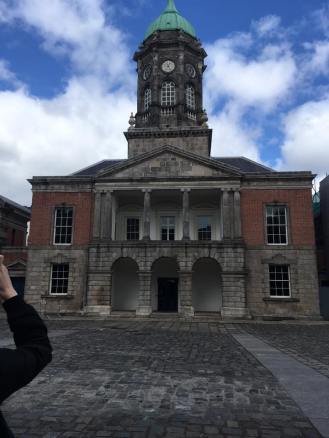 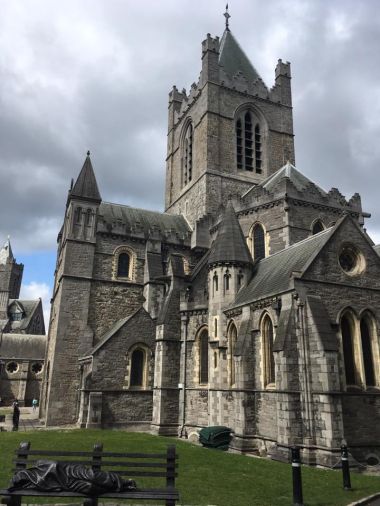 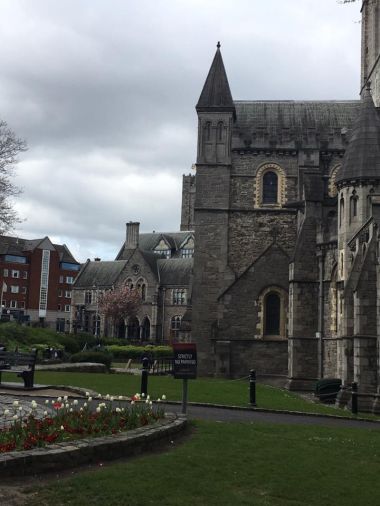 We got off in the Christ Church Cathedral area, near to Temple Bar, and had a wander, before getting back on the bus and heading to our final stop, the Guinness Storehouse: the biggest must do if you’re in Dublin.

Queues can be lengthy, but a big bonus of going there on the sightseeing bus is that the operators give out tickets on board, that give you fast track entry, and are also discounted!

This is not only Dublin’s, but also the whole of Ireland’s top tourist attraction.

Across seven floors, you start out learning about the history of Guinness, including a look back at all of their advertising campaigns. From here you are taken through the brewing process, from ingredients, to even a lesson in how to really taste the flavour in each pint (to be honest I was a bit useless at this and could only taste the drink as a whole, but you get a free sample of Guinness so definitely worth a go if like me you love a freebie, or just getting your money’s worth!).

After this we participated in the main attraction: learning how to pull the perfect pint, whilst coincidentally learning why I should never work in a bar. 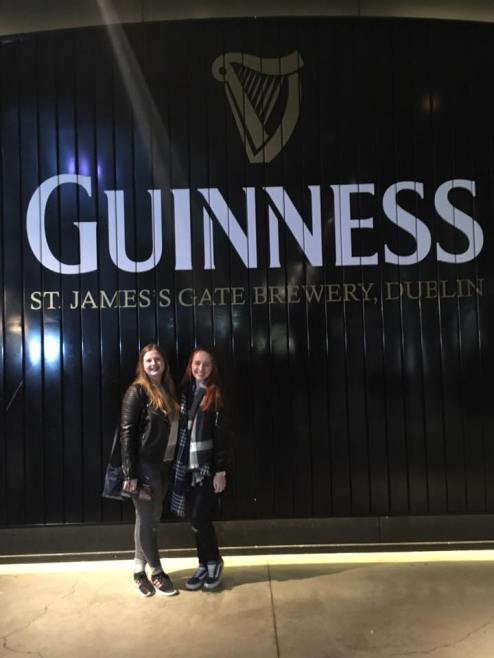 I put that down to the nerves though, as not only are you being closely judged by someone who shows people how to do this roughly 35646 times a day, but you are also watched by the rest of your group (about twenty people). Oh, and a man was going round with a camera to each group recording them for a screen else where in the building, no pressure. 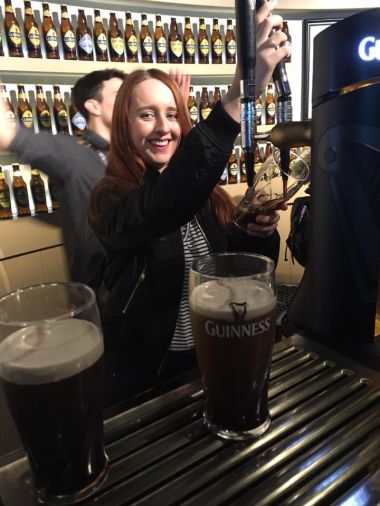 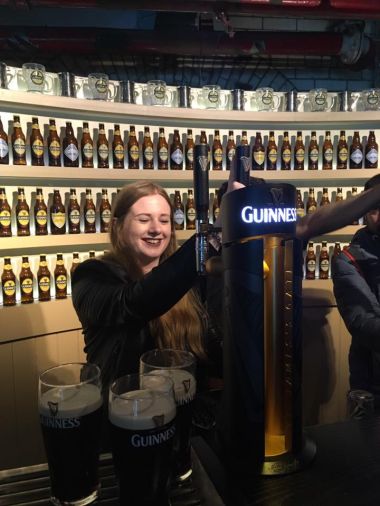 The jokes on you though as whatever ends up in your glass you get (have) to keep and drink for free! Luckily ours didn’t turn out too badly in the end, and we chose to take them to the rooftop seating area (which is enclosed by a glass dome). From here the scenery is simply stunning, with 360 views of the city. (The Guinness was less stunning however, and I could only drink about half my pint; sorry Ireland: I’ll blame my pouring skills!). 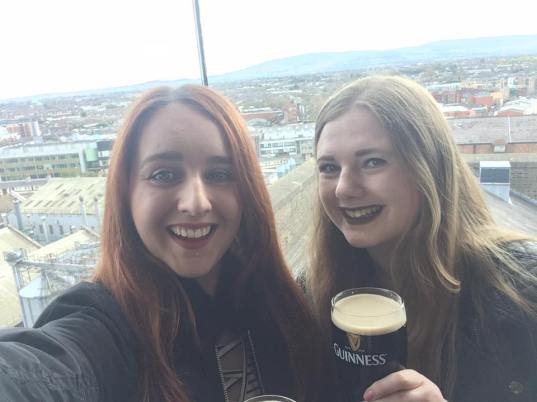 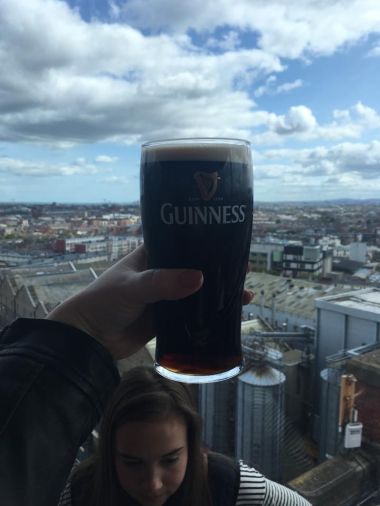 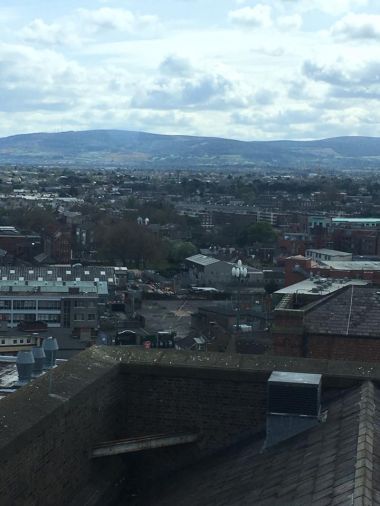 For dinner that night we visited a branch of an Irish gourmet burger chain called ‘BóBós’. They take pride in, and base their business off the fact, that all the burgers are from home grown cows. And they really were delicious, and there was so (too) much food! And the milkshakes were heavenly!

Next stop, home to get ready for our big Dublin night out. For a city that is well known for its alcohol (a lot of tourist attractions are even themed around the breweries of course), and party vibes, we were very excited. The bar we were heading to was on the river Liffey, and was aptly called River Bar. A sportsbar by day, and a party venue by night, the vibe in this place was very good! It was very pricey in here however, but the music was great, and we had a fun night!

The next day was Easter Sunday and we wanted to find something festive to do. After a delicious brunch of salmon and eggs among the locals in a nearby cafe, (which had a lovely independent, homely feel), we headed to our Easter event. We had discovered a Mad Hatters Tea Party themed Easter fun day in a forest, complete with bouncy castle, face painting, and treasure hunt.

This was in a neighbourhood a bit further out of the centre, in Deerpark, Mount Merrion, and we decided to walk to the bus stop. The charm of Dublin in these little back streets was undeniable- it was cute and idyllic. And riding the bus to the outskirts of suburbia was a great way to see more of the city. When we arrived, you would be forgiven for thinking the neighbourhood wasn’t part of a capital city. It was quiet and spacious, and the houses were huge! Plus there was fantastic green areas and a view down to the water.

Of course we unleashed our inner 10 year olds (it didn’t take much), and partook in the treasure hunt. We were very happy with our little haul of winnings (even if we did copy a few answers off the girl shouting them ahead of us, oops but we really wanted that choc!).

After a stroll back to the bus stop (that turned into a run when it started raining, luckily we had won our chocolate already!), we arrived back in the city, to O’Connell Street.

We had planned to spend the afternoon doing some retail therapy, however due to it being Easter Sunday, all the shops were shut. However, luckily for us and all the other stupid tourists, the souvenir shops were still open (and we had no choice but to go in and spend our money in there). After half an hour or so of looking at the array of t-shirts, key-rings and fridge magnets each shop had to offer, we each had a nice selection of items. Off course these included matching jumpers, along with fluffy leprechaun socks.

Then, it was back to the hotel to attempt to pack (it’s harder than you think to fit fluffy socks in an already over-flowing suitcase) before dinner and our last evening.

Due to the heavy rain, we spent the last evening having a girly night in, with movies, card games and a gossip. Completed by a Dominos pizza from down the road, this was the perfect chilled end to a beautiful weekend in the Irish capital… until I woke up with food poisoning from the pizza! Luckily, once I had gone back to sleep I felt much better the next day, especially because we had a flight to catch.

There was certainly a charm to the Irish capital city; within the people and the city itself, and I would love to go back to experience more of the city, and when it is not Easter. If you are looking for a quick weekend escape, with great food, great entertainment and great people, then this is the place for you. 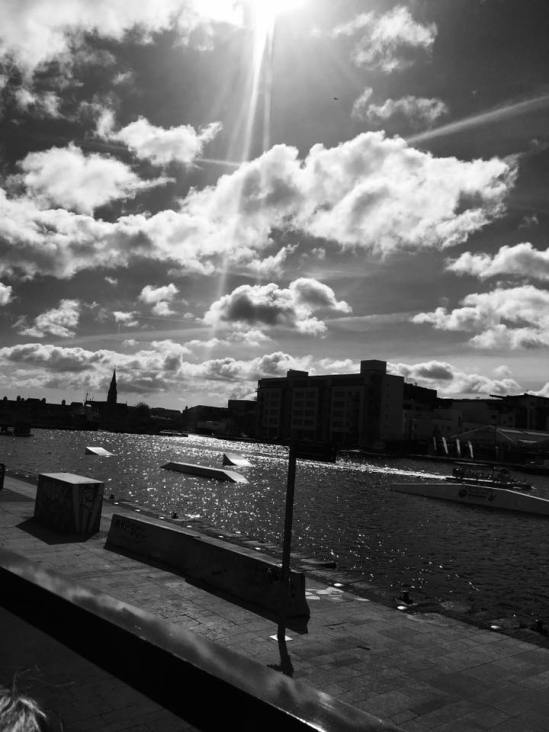